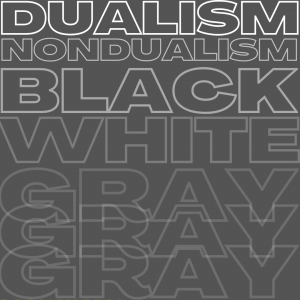 Even that question is a trap… an example of dualism! Dualism itself is neither good nor bad, it is simply the philosophy that sees only two ways, it labels and separates them. This or That. Often attaching a right vs wrong judgment to those two different things. And standing on one side as you do it. Us vs Them. Me vs You. Certainly not a win-win situation, usually an I-win-you-lose.

In an extreme illustration, you could picture dualism like an old west dual—20 paces, turn and shoot! But not all division of “this way or that way” ends in a fight.

I would propose dualism itself isn’t ‘good or bad’, but a necessary step in being able to learn fundamentals of black and white, the letter of the law, basic right from wrong. Children need to learn right from wrong, and experience some consequences of their actions. The entire Old Testament was an example of commandments and covenants and rules and consequences. But as we move into the realm of greater maturity, and look at how Jesus walked the earth, I would propose that in most cases, He takes it one step further: beyond dualism and the law, into the grace-filled land of the grays aka non dualistic thinking.

We see this in the story of the woman caught in the act of adultery. Notice that Jesus gives first a place for the law (black and white, right and wrong), acknowledging the standard…but then he finds a way to go beyond the limiting reality of rules and circumstance—into the land of grace. His parting words to her are “Has no one condemned you? Then neither to do I. Go and sin no more.” He’s not ignoring the issue or neglecting to call it sin/wrong—but manages to take it beyond into a place of a pardon and give her a fresh start. He elevates the situation (“I have not come to abolish the law…but to fulfill it.”), takes our requirements to a new level.

“You’ve heard it said…but I say…if anyone slaps you on the right cheek, turn to them the other cheek also.” Indicating, yes, there is a law and you know what it says, but did you know there’s more…

How often do we stop at the satisfaction of knowing we’re on the right side of the law, we’ve seen it clearly and we’re right, and we miss the chance to ask Jesus how he sees it in this moment? Is there more to see? And what the next step is? Are we willing to let go of our dualistic thinking and move into the messy middle of non-dualism? Admitting there are things we might not know, things yet to learn. All the while, looking to Jesus as our guide.